Being part of a club culture landscape that is often defined by status, chart music, cheap sound systems and expensive door and alcohol prices; young people are often at ends with their options for a unique night out.

Their consistently packed loft parties take on a diverse range of sonic influences, from ambient auras and afro modes to rapturous house and hedonistic techno. But it’s for their particular approach positioning its dancers and their freedom of expression at its centre, that inner u have caught our eye. Very few rules and absolute fun. As a result, stepping into one of their parties is like entering a masquerade where each guest has been set their own individual theme; a fairly liberating experience! We spoke to co-founders Ben Bishop and Will Power about the creation of inner u and the party’s politics of pleasure.

Could you tell us a little about inner u and what you are all about?

inner u is a party that (for the time being) we’re holding at a private loft space in Tottenham. It’s a real DIY affair which sits somewhere between a club night and a house party – we lug our own decks in and dress the place up with home-made decorations. One founding idea for the party is rooted in the idea that clubs and clubbing is so much about creating a new self/selfs, a temporal identity that may only exist during the night. This was an idea we wanted to play around with, and it’s something we try to evoke in our crowd.

For those who may not have been to an inner u party, what can people expect when they walk onto the dance floor?

Potentially, two people with their heads painted gold dancing around with a piece of red string tied between their legs. Probably some unusual makeup (on boys more often than girls), people dressed up, people dressed down… one person turned up to the second party with a toy bow and arrow, which we still don’t really understand ourselves. But, mainly you can just expect lots of really great people enjoying the opportunity to party in a space that offers a bit more freedom than a regular club, who have probably got a bit more creative than usual with their appearance too. The night also incorporates the work of contemporary performance artists and we try to keep a very level playing field between the performers, DJs and party people. Everyone is interacting. We’re all in this together. There is no guestlist, no backstage, no private vip room – everyone is equal at inner u. 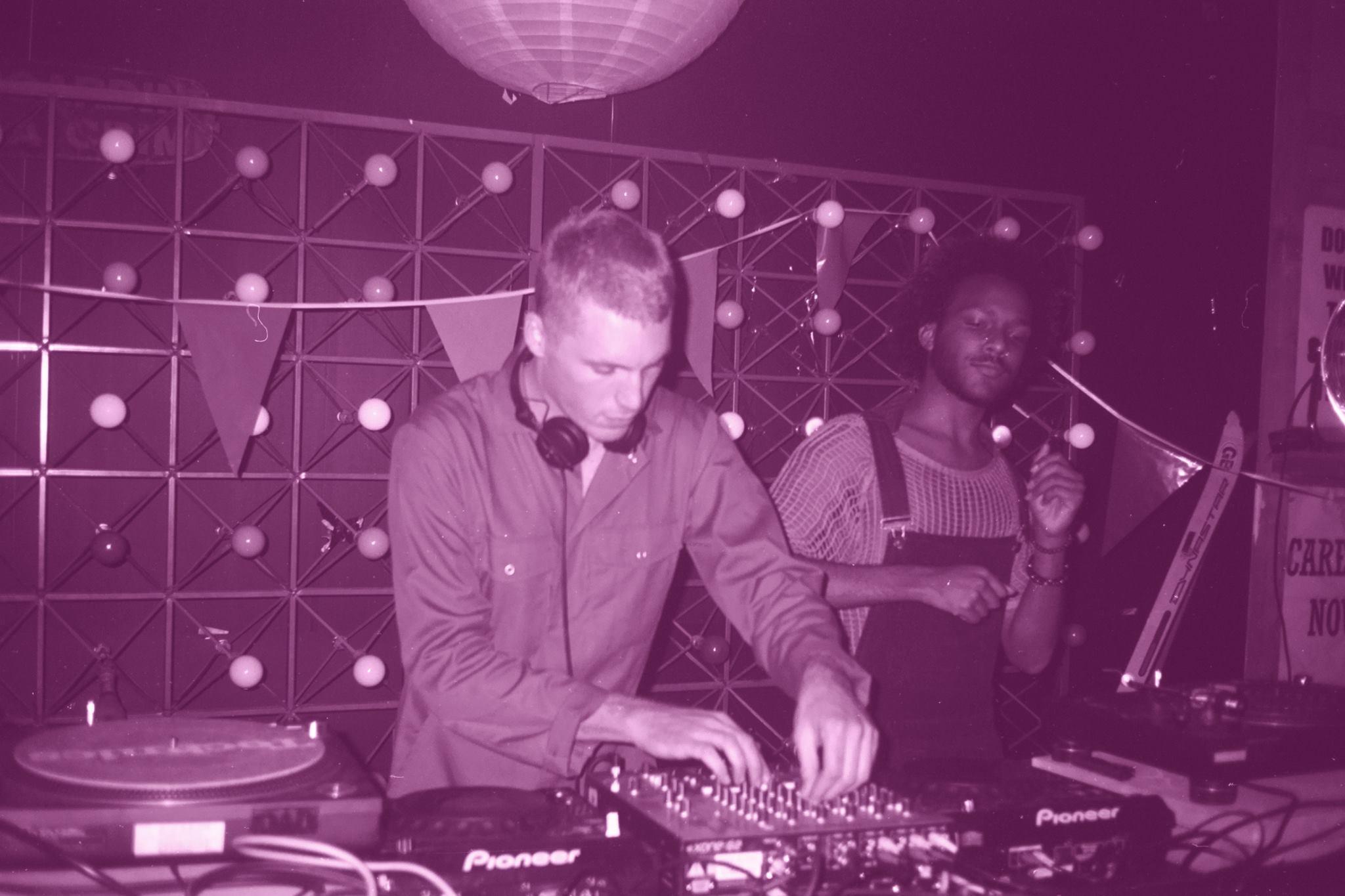 Outside yourselves, has there been anyone else involved who’s been pivotal to the party’s success so far?

Yes! We need to give a massive shout out to DJ, producer and friend Phin, who was with us for the first three parties and played a big role in shaping it – she’s a regular at some of London’s best underground techno parties, like HTBX. Artist and friend Opashona Ghosh is the talent behind our logo. The team has recently been joined by the immensely talented Sara Sassenelli, a producer and curator who runs the art discussion event Hotline, among far too many other things. She’s taking a lead in developing the performance and visual art elements of the night forward, as well as working with our regular performance duo, Eve Stainton and Michael Kitchin, from The Uncollective. We also have to give a shout out to other friends, like Rosie Rockel, who have been wicked at helping us keep things running smoothly behind the scenes.

What prompted you to start inner u? Has the DIY selector format you have adopted taken inspiration from anywhere in particular and do you plan to keep it this way?

Really we just wanted to make exactly the kind of party we wanted to be at. Over the past few years, we’ve been drawn less and less to London’s more mainstream clubs/events, while also realising that if you put in the work to find them there is a wealth of incredible parties in the city that show what happens when people with the right ideas and energy come together. The Lucky Cloud parties are a great example of a party done for the right reasons that has really shaped what we do (Ben even volunteers there). So yes, with this in mind, we’re far more interested in booking people who are interesting and exciting for other reasons than just the usual – so far they’ve been friends, friends of friends, old colleagues, people we’ve met through other parties, people we’ve heard about etc – it’s a nice, supporting network that’s developing and we hope that DJs we have play would happily and easily return as just party-goers next time around. We’re super excited to have Alejandro Asencio and Vivi as our guests for the next party. Alejandro has run kitsch and bizarro parties for London’s Spanish queer community over the past 12 years – his current event is called Lady Olé – and Vivi is our first returning guest. She completely blew us away with her selections in house and techno last time and donated a fair share of her fee to a charity we support through our parties (Mind in Haringey) – so we all just thought she was the coolest person ever. She’s part of the Hologram and rx techno crews in London. So yes, we definitely plan to continue (and love) programming in this fashion.

[Will Power at inner u #2, credit: Dan Douglass]

What would you say has been key in fuelling the acceptance and embracement of your party ethos?

It’s hard to speak for our crowd, but we have a lot of regulars who are more important than anything we do in keeping the atmosphere so perfect. It’s a small night but everyone who comes really wants to be there. We’ve been putting the party and the community we’re trying foster ahead of making any money and think it’s really paying off. Because we promote the party in a relatively discreet fashion we think it helps create a sense that everyone who knows about it is kind of part of the adventure. At least, we hope they do.

What role has music played in this?

Are there any parties, London based or otherwise, that are particularly impressing you at the moment?

We love KAOS, which is a long-running dark industrial/gothic night at Eletrowerkz. Aesthetically and musically, it couldn’t be more different to inner u, but we love the strength of its identity and the way they’ve generated a space for people to be experimental within. Mr Assister’s Beaming for its dedication to what happens to the mind when you fill a room to the brim with nothing but a smoke machine, a laser and some of the most hypnotic house/techno around. Also – Touching Bass which has some of the best dancing in the city. Dan Hampson at the Yard also deserves a massive shout out for managing a space where you can have heavy techno night for charity one day, a drag-king hiphop/rnb party the next, the following week have a Whities party and then Scientific Dreamz of U down. We also rate Rye Wax for its really open policy to letting people put on crazy shit – this is the attitude that helps keep London nightlife really buzzing and diverse.

What’s your take on London nightlife and the small communities it seems to produce? How do you see inner u’s role within this?

There’s a lot of problems with London’s more mainstream clubs and nightlife – it’s expensive, impersonal, uncomfortable, macho and just unpleasant for a lot of people. A lot of these smaller communities around low key nights and promoters have been a response to this; groups of people just trying to forge little corners in a city where they can party and express themselves without any hassle. Places where mutual respect and shared politics are at the forefront instead of shots, lads and security guards shouting at you for sitting down in the smoking area. We suppose we see ourselves as trying to create another little corner!