If you’re in Toronto and haven’t been to a Dudebox party, you’ve been missing out. Dudebox kicked off in 2007 in a loft in Chinatown. A perfect storm of unusual spaces, great music and charity at the heart of everything they do (they’ve raised over $145,000 so far). Dudebox is the ultimate solution to the mundanity of your usual weekend plans. We caught up with Said Yassin, a co-founder of Dudebox to figure out what made a small night gain momentum and become a charitable movement.

“The name isn’t something we necessarily love,” says Said, “But, it just kind of stuck with us. We all lived in this super cool loft in Chinatown together, and even though it was a 3 bedroom apartment, there were always 5-8 guys living there, so the name came from that.”

What started off as a series of house parties, “We used to throw super huge house parties until the house was basically falling apart,” has now morphed into huge events based on shared community values.

“All the guys involved are people who are very big on community. Our house at the time was like the hub for all our friends and their friends. When we all moved out, we decided that we still wanted to throw parties and bring people together.” But considering the amount of guys involved in throwing a Dudebox night, splitting the profit at the end of a party was hard going. “One of us was like, ‘Let’s just donate it to charity,’ so, we ran with it.”

The first party Dudebox threw after the Chinatown loft was to raise money to buy a cow for a village in Kenya. “That party did so well that we bought two.” There is something admirable about a bunch of guys throwing parties for mates and instead of pocketing the profits, recognising that there are others who need it more.

“I think we all recognise how fortunate we are to be in the position we are in. It was just natural and made sense to everyone. For me personally, my family is from Somalia and I think about that all the time. Like, how different my life could have been and how blessed I am to be where I am.”

The sense of community and giving back probably stems from the fact that Dudebox is, in itself, a community. “Dudebox is made up of seven guys but we have so many friends that help out through the night and it would be impossible to make it happen without them. So we would have somewhere between 7-31 people helping out.”

As to what you can expect from a Dudebox night? “We are really trying to give people something that is so far away from what a usual night out is. We focus on using unfamiliar spaces, whether it’s a manufacturing warehouse or a car wash . We want our events to be really special and unique.”

The venue is clearly important to a Dudebox night out, because, let’s face it, who wants to go to the same pub or club every weekend? “We spend a lot of time scouting potential spaces and trying to convince landlords and owners that we are legitimate adults who can be trusted with their spaces. For every 20 spaces we see, we might get lucky with one.” And looking for a space that will fit 1,000 people isn’t easy.

The most memorable event so far has been a party that took place in a car wash. “Just convincing the owners to let us put that on took almost a month. When it finally happened it was like a dream.” Though that doesn’t mean that it didn’t take a bit of the guys massaging the truth to get the party going, “I had to initially tell the receptionist that I was shooting a movie. That’s how she ended up giving me the owner’s contact.” When you’ve raised over $145,000 for local and international charities, you can be forgiven for stretching the truth a bit.

The night caters to every type of music lover. “Our crowd is super mixed and very diverse. We get loads of people coming through, people who want to support charity, people who want to dance, people who just want to stand up against a wall with their four fingers in their pockets and their thumb hanging out.” While mainly a hip hop night, they work with local talent from Toronto, where there seems to be an abundance of people ready and excited to play at DudeBox: Nino Brown, James Redi, and Jon Chetty to name a few. This night is all about “the space, the music, the vibe, and the potential that Drake might come.”

So, if you’re in Toronto, or planning a visit sometime soon, follow @dudebox_toronto on Instagram, or DUDEBOX TORONTO on Facebook to find out what’s going on. It’s sure to be a night you won’t forget, in a space you could have never imagined. 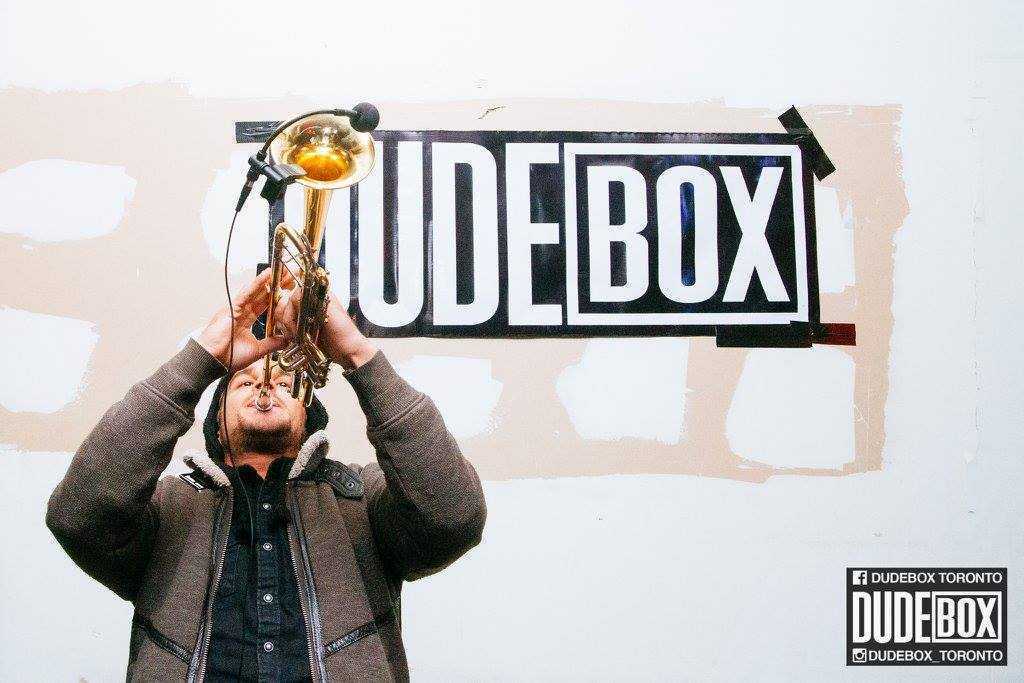